Here is a list of books that I’ve collected over the years about learning Afrikaans which you might find helpful.

Note: I will update the photos once I’ve sorted out my WordPress problems which plague this site.

Seeing as Johan on the Yahoo Learn Afrikaans group posted it on the discussion page I realised I hadn’t updated it for a while. 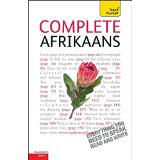 The books itself has everything that it had previously, but it seems even more thorough and the layout looks just a lot nicer, in my opinion. The box says there is, “Online content to enrich your learning”, although from what I’ve seen on the website there isn’t really that much at the moment, but maybe something they’ll add in future. Put simply, this is excellent although probably not necessary if you already have the 2005 version.

Teach Yourself Afrikaans – Lydia McDermott (link)
This came out in 2005 and comes with two CDs. This and Colloquial Afrikaans (see below) are the best books avilable I think. Highly recommended. A revised edition was published in November 2010. I’ve seen some of the other revised Teach Yourself books and I’m quite impressed so this should be good.

Colloquial Afrikaans – Bruce Donaldson (link)
This is an excellent book. Bruce Donaldson is a professor at the Department of Germanic Studies at the University of Melbourne and also wrote Colloquial Dutch in the series. Ignore some of the reviews on Amazon which seem to have been written by people who tried to learn the language just through the CDs. It covers pretty much all you need to know. Highly recommended.

Teach Yourself Afrikaans – Helena van Schalkwyk (link)
This is the first book I used because for a long time it was the only one that was easily available. It is now quite dated – in one dialogue two men discuss going to a strip club – and doesn’t come with CD or cassette. The grammar also seems to fade out and it doesn’t address some concepts which you would have expected it to cover. That aside, it’s not a bad book at all and I learned a lot from this. 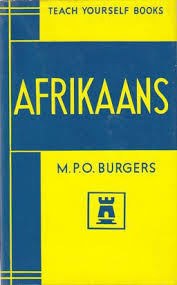 Teach Yourself Afrikaans – MPO Burgers (link)
This was first published in 1957 and it shows in its approach to language learning. Still, it is comprehensive and I bought it on the internet for £5. The old version in the yellow and blue covers are something of a collector’s item now. 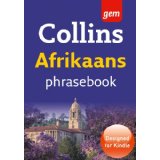 Collins Afrikaans Phrasebook (link)
This is quite a good little phrasebook which pretty much sums up all you need to know about the whole language really.

A Grammar of Afrikaans

A Grammar of Afrikaans – Bruce Donaldson (link)
It costs £100 but it is excellent. It is the definitive grammar book available. 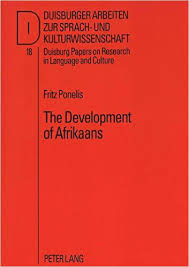 The Development of Afrikaans

The Development of Afrikaans – Fritz Ponelis (link)
An interesting and comprehensive study of the development of the language with selected texts illustrating the linguistic changes.

A Reference Grammar of Afrikaans – George Carcas (link)
For £5 this is an absolute bargain. It’s only 48 pages long as well so I recommend it. 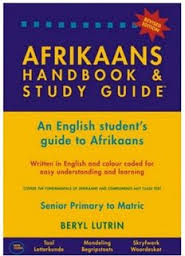 Afrikaans: A Handbook and Study Aid – Beryl Lutrin (link)
Not sure how I found it but it cost £5 including postage from South Africa. This is an excellent little book really and it explains the grammar so well. Highly recommended. 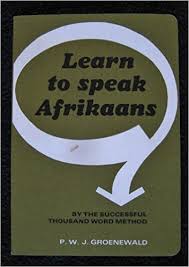 Learn to Speak Afrikaans – PWJ Groenewald (link)
It’s an old one based on the 1,000 words methods. You can buy it cheaply online and in some bookshops. 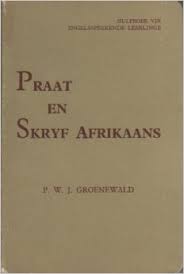 Praat en Skryf Afrikaans – PWJ Gorenewald
Not entirely dissimilar to Learn to Speak Afrikaans. It includes exercises and grammar and is all explained in Afrikaans. Available usually second hand on Amazon. 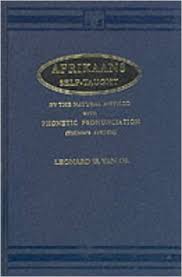 Afrikaans Self-taught: By the Natural Method with Phonetic Pronunciation (Thimm’s System) – Leonard van Os (link)
First published in 1927 and has just been republished. It has phonetic pronunciation guide and it’s cheap at least. 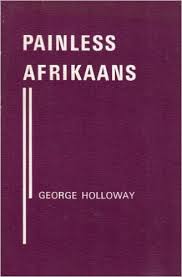 Painless Afrikaans – George Holloway (link)
Another old book from the 1960s. The unintentionally funny title aside, it’s pretty decent actually because it has quite a strong grammar focus which I like.

Afrikaans for English-Speaking Students – DJ Potgieter, A Geldenhuys (link)
This is an old book from the 1930s originally which I found on eBay for £5. It’s not really very different from Painless Afrikaans or Learn to Speak Afrikaans and is pretty thorough in doing what it aims to do.

How To Say It In Afrikaans – A phrase book for English-speaking Immigrants/Hoe Om Dit In Afrikaans Te Sê – ‘n Fraseboek vir Engels-sprekende immigrate
Got it second hand on Amazon, as it says it’s just a phrasebook.

Afrikaans audiobook (link)
Two cassettes and phrasebook. It’s not now much use to be honest.

Vlot Afrikaans – Vir Standerd 3 – MA Basson.
Another school book with texts and exercises all in Afrikaans. Available at times on Amazon.

Form and Meaning in Word Formation: Study of Afrikaans Reduplication (Cambridge Studies in Linguistics) – Rudolf Botha (link)
I got this cheap somewhere. I haven’t read it in details because it’s a doctoral piece but it is quite interesting.

Brush up your Afrikaans – Jan Nieuwoudt Tromp
I bought this on Amazon Zshops. It’s unintentionally amusing in an almost Jeeves and Wooster-way and very dated as it was first published in 1941.

Talk Now! Learn Afrikaans (link)
I never liked this one, frankly. I just don’t like computer-based learning but it seems everyone else does now.

Kommunikeer in Afrikaans 6
I was given this by someone on the Internet. It’s a school book but not bad.

Afrikaans – Conversaphone
One cassette and phrasebook. I bought it online from USA in about 1998 when Internet shopping was in its infancy. It’s limited in its range, but at least you get to hear it spoken. There is hilarity in the dialogues with the male voice answering the phone in a very serious tone, “Meneer!”.

Pharos Afrikaans-Engels/Engels-Afrikaans Woordeboek (link)
This is the best and most comprehensive dictionary with over 200,000 which explains the cost. It is also available as a CD Rom.

A Dictionary of South African English (link)
Well I like it and find it helpful. It’s Afrikaans-focused, but there are plenty of Afrikaans words and expressions.

Grant and Cutler (link) has recently been bought out by Foyles (link) and has relocated from Great Marlborough Street to the first floor of its flagship store on Charing Cross Road in March 2011. I’ve been to the new store and it looks good. They stock the normal selection of teach yourself Afrikaans books , dictionaries and some novels, usually André Brink and Harry Potter.